L.A. By Night is a dark tale of personal horror and inhuman conspiracy that sees four vampires doing their best to navigate the macabre affairs and terrifying realities of surviving in the Los Angeles night. The RPG system is Vampire: The Masquerade 5th Edition from White Wolf Entertainment and Onyx Path Publishing. This original story is developed by Jason Carl, the chronicle's Storyteller, and stars Erika Ishii as Annabelle, B. Dave Walters as Victor Temple, Alexander Ward as Jasper, and Cynthia Marie as Nelli G.

L.A. By Night is streamed live weekly on Geek & Sundry's Twitch channel. Seasons One, Two, and Three aired on Friday nights at 8pm PT. No announcements have yet been made about Season Four.

Seasons One and Two, including the epilogues and the Wonder-Con live show, are available as a podcast. 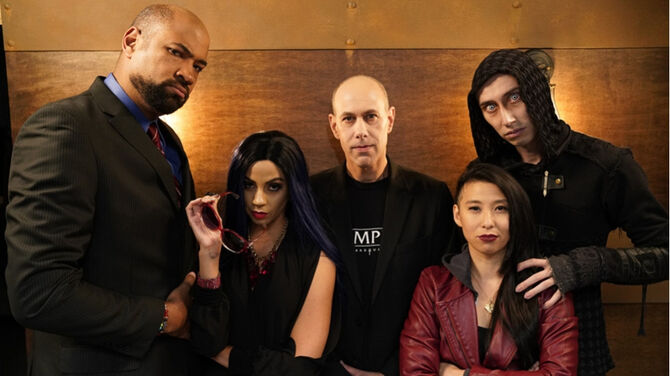 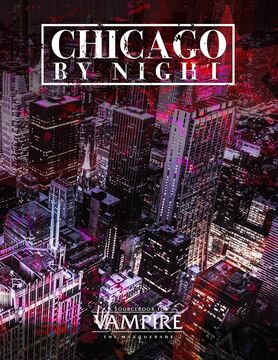 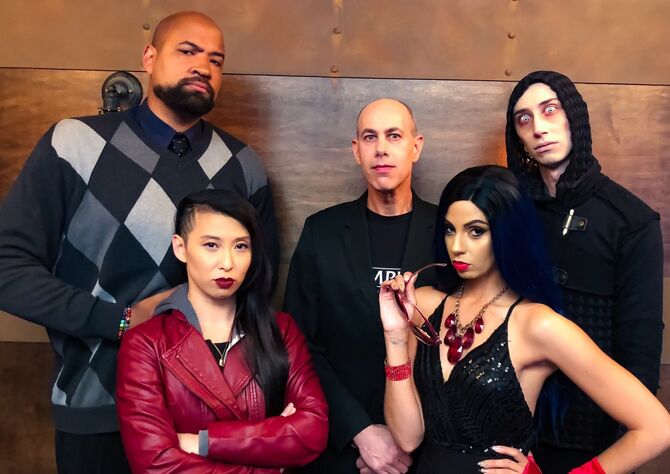 Season Three, including all Epilogues, are available on GeekAndSundry.com & YouTube.

Season One, Season Two, & the WonderCon live show are available as a podcast.

Available for pre-order, the book will include Clan Lasombra updated for 5th Edition.

To the vampires who live here, Los Angeles is a city in turmoil.

Passionate and fiery, Los Angeles burns with an excitement found in no other city. It has become the center of fashion, art, entertainment — and the Anarch Movement. Fifty years ago, the nighttime streets ran red with Elder blood, and the anarchs claimed the city for themselves. They stood poised to make it a land unparalleled in Kindred history.

For decades it has been the unliving heart of the self-proclaimed "Free States," a territory run by the Anarch Movement, ranging from the Mexican border to San Francisco and stretching as far inland as San Diego. And to hear the Anarchs tell it, the city was a model of freedom and equality to Kindred across the world. The truth is that an ever-changing cast of local leaders carved the Free States into bite-sized territories they ruled as Barons, and that your mileage on all that "freedom and equality" can vary wildly.

Despite its ill-fated attempt at installing a Prince previously (see the events of the Vampire: The Masquerade Bloodlines PC game), the Camarilla never gave up on reclaiming Los Angeles. Turning loss into opportunity, it recently abandoned San Francisco to its encroaching enemies and moved on Los Angeles, led by Vannevar Thomas of Clan Ventrue. Meanwhile, Tara Kearney, the Baron of San Diego ever since the 1944 Anarch Revolt, turned traitor to the cause and sided with the Camarilla, catching L.A. in a pincer.

While the city has not fallen to the Camarilla completely, it's close, and Vannevar Thomas has declared himself its new Prince. He now attempts to cement his power, while the remaining Anarch Barons choose how to deal with this uncomfortable situation. Will they admit defeat and sue for peace, or will they resist--and if so, how?

We are an encyclopedia run and maintained by people just like you!

An Ode to the Undead: A History of Zombie Movies from George Romero to Zack Snyder  Hollywood Insider...

Anatomy of San Francisco Now: Fewer People, Jobs, Tourists, & Businesses, But More Spending by the Hangers-on (But that Was Inflation)  WOLF STREET...

Between The Buried And Me reschedule 20th anniversary North American tour  Next Mosh...

Community content is available under CC-BY-SA unless otherwise noted.